They sure don’t make this process obvious.  Here’s the settings you need: 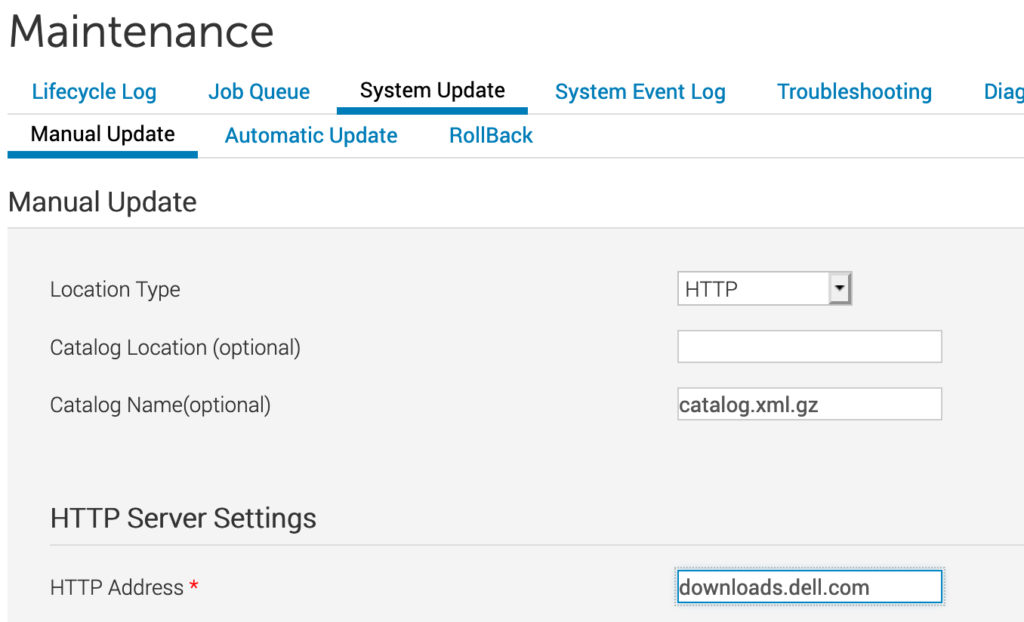 Now, depending on the age of your iDRAC, it may not let you upgrade directly, even though they’ll give you no hint that that is the issue.  I was trying to go from a 3.x version to 4.00.00 and seeing this garbage:

The simple issue was I could not go from the version I was on to the 4.00.00 release.  I needed to go through Dell’s site, download a later 3.x release, install it via local file upload, then the live update worked.

Most of my other firmware updated without issue; BIOS, backplane, SATA controller, Mellanox NIC’s, onboard NIC’s, etc.  It did take 60 to 90 minutes to work its way through those.  However, some failed; those failures include:

I was ultimately able to get Serial ATA to update by choosing to perform only that update.  That of course wasted another 20 to 30 minutes of rebooting cycles, and it always wants to start the guest OS again, which means you have to waste actual eyeball time watching this crap to stop the guest OS from booting if you don’t want it back up until all this work is done.

Then I moved on to the IDSDM update, by itself, which allowed it to go on.  Again, another 20-30 min.  However, the outcome is the update wizard endlessly thinking the thing still needs updating.  Apparently it can’t detect the running version:

However, the lifecycle log indicates the update did go on successfully:

OS Collector, never works.  I gave up.  Fuck it.

All in all, updating a single R940 wasted a few hours of time.  Seriously, a $30k server wastes several man hours to update properly?  This is why people use Cisco UCS…  it may take a long time to update, but it’s a reliable update, and most of it is not eyeball time because it doesn’t do things that will break an online environment, and will wait for user acknowledgement when it’s at one of those stages.